Hey everyone. I’ve been posting mostly cutesy fun topics so far but tonight I wanted to talk about baby allergies.

When Rylee was almost 2 months old she started to show blood in her stool. Of course being a new mom, I totally freaked. We took her into a small town emergency room because we were in middle of nowhere camping. They did an exam and didn’t feel like there was an emergency but they wanted to be sure so they sent us to a children’s hospital in the city. After we got a scan, blood work and an ultrasound done they said it was allergies, cow’s milk protein allergy. They switched our formula (I was nursing and supplementing with formula) and told me no more dairy.

So off we went, happy with a manageable result, so I thought. The blood kept appearing. I was warned it could take 2 weeks for the dairy to leave our bodies. After 2 weeks the blood was still showing up during diaper changes so off to the doctor we went. We were sent for more tests and still got the allergy response, cow’s milk protein. They again switched our formula and told me to make sure I was reading all labels but still the blood kept showing up.

I started to get frustrated and upset, wondering what I was eating that was causing this to happen to my sweet girl. I was blaming myself and felt so horrible. The doctor suggested I stop eating gluten products as well. So now I was not eating any gluten or dairy products. Two days after I saw no blood during diaper changes and it continued this was for a week. I was convinced it was just gluten so I decided to add dairy back to my diet and nothing happened. Yay, we figured out her allergy!

Then one morning, I pulled open her diaper and there were those familiar red spots. I felt so defeated. Off to the doctor we went. He was still convinced it was dairy causing the issues, me not so much. So no I was told to go off dairy, gluten, eggs, nuts, seafood. Do you know how hard it is to find products that contain none of these things, especially living in a small town? Let’s just say my stir fry recipes were not as tasty as usual. I was starting to think I should just stop nursing but then that little feeling of guilt crept in, you know the one. The one that says breast is best if possible, so I kept at it.

I was allowed to introduce one item back in after 2 weeks of no blood. So my first item introduced was dairy, I just felt that dairy was not the culprit even though my doctor and the gastro-intestinal specialist believed it was. This mama was right, no blood. Next I tried gluten because I was pretty sure it was the culprit and low and behold the blood showed up. Another one for mama. Now we both thought there was a second allergy, just didn’t know what. I ruled out seafood and nuts. All that was left was eggs. I had scrambled eggs for breakfast and an omelette for dinner and the next day my little one had blood. We found our second culprit.

Little Miss Rylee had a gluten and egg sensitivity. It took 3 months to figure all this out and I wanted to give up and quit nursing many times. I kept telling myself make it to 6 months and see if they disappear because my doctor said most babies outgrow allergies starting at 6 months and almost all are gone by 1 year.

A couple weeks before she turned 6 months old was Thanksgiving Day. I decided I was going to enjoy the meal. I was saving up pumped milk and she was mostly drinking from a bottle anyways so I wasn’t worried.

Miss Rylee had other plans. She got a cold and was a little cranky and only wanted her mama to nurse her. So after a night of waking and crying, I gave in. I was expecting the blood to be there the next day and it wasn’t. So I ate more and nothing! The allergies were gone.

I don’t know when they actually left, somewhere between 4 and 6 months but I was thankful. Rylee and I are now able to eat whatever we want and are super happy about it as evident in our post-Christmas meal selfie! 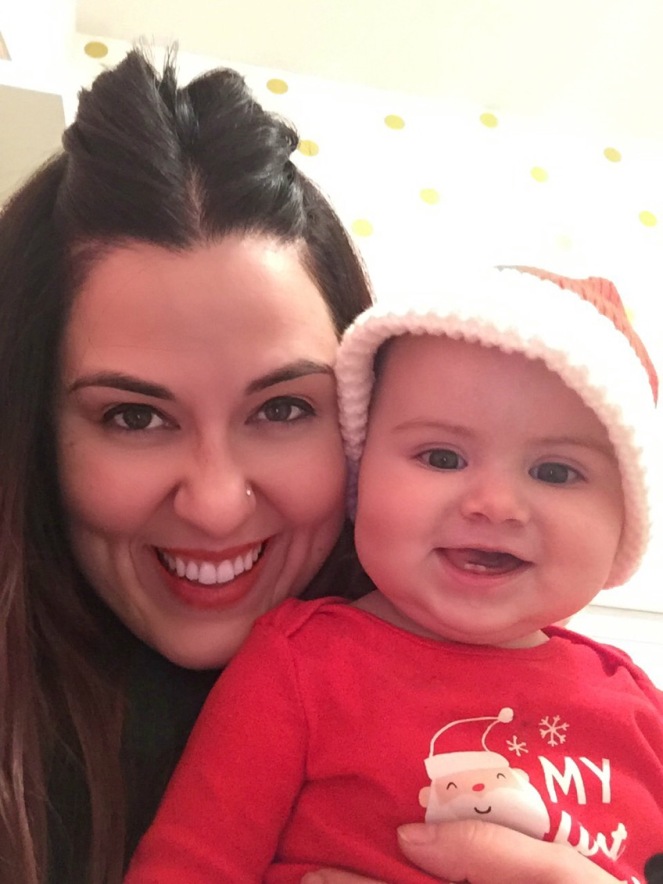 My Tips When Determining or Dealing With Allergies

I hope you don’t have to deal with allergies with you littles but if you do I hope this helps!